For the purposes of current research (NFGRF funded) ‘photogrammetry’ will have TWO distinct applications:

The process by which two images are compared to derive measurement data.

My images are derived using the Spheron SpheroCam system equipped with the Immersive Tripod Head. The Spheron system requires two images to be captured with a vertical offset of 600 millimetres (mm) or 23.622 inches

Above : Second photogrammetry pair – note viewing angle is lower than above (due to 600mm offset). Green line identifies an axis upon which second point must coincide.

Above : After confirming the position, the measurement of 4.2 inches is confirmed.

After processing the native Spheron .sph file, those images allow users to view and select exactly which elements of the image are to be measured.

Measurement points can be exported into mainstream computer modelling programs such as Autodesk’s 3d Studio Max or Maya via an XYZ exporter.

Photogrammetry is becoming more prevalent now with both the games, film and surveying industries, the later using drones to capture aerial imagery that will later be translated into 3D geometry.

Multiple images can be analyzed and 3D geometry derived. Given the Spheron SceneCam generates ultra high quality, 55 Megapixel images (TIFFs or OpenEXRs), the results should be pretty good.

Please watch video below to see the process in action. This is first time I have attempted such a process. 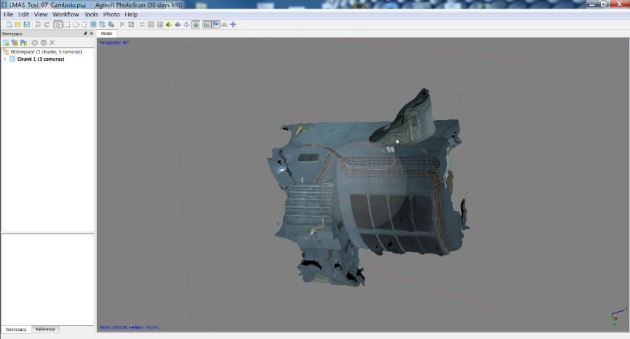 In terms of current research, this could lead to the development of very accurate computer models, derived from photography, with very faithful texture maps being applied to surfaces – as opposed to generic software shaders.